A test, adjust and balance service for a building’s HVAC system serves a purpose similar to that of a tune-up keeping a car’s engine running healthily. Preventative maintenance for any vehicle or piece of equipment is understandably a best practice for avoiding high stress circumstances, such as a car break-down in the middle of a deserted road or an HVAC break-down on a hot August day that drives customers and employees out the door! HVAC systems need to be balanced to ensure they perform their job properly and efficiently.

The following are common reasons that building owners, operators, and managers contact Melink for a rebalance service of their commercial facilities:

Unhappy customers and employees complain to management when their discomfort is affecting their experience. Or worse, they don’t say anything and just leave to take their support elsewhere. Common reported complaints include:

In a majority of circumstances, these issues are caused by an HVAC system that is not performing to design specifications. For example, we were called out to a restaurant whose kitchen was so hot that employees were reportedly passing out, and to another facility with an airflow problem that led to the formation of ice a foot thick on a cooling coil!

Just like people, if health isn’t maintained in a 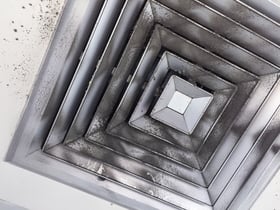 building, it will eventually show symptoms of illness. We see the following symptoms on a regular basis when we’re called out for an HVAC rebalance:

As an example, we were called to a facility whose front door was so hard to open from a negative pressure that patrons thought the door was locked, and another facility with such prolonged high humidity that it warped and damaged tens of thousands of dollars of fine woodwork!

When upgrading rooftop units, coils, ductwork, air diffusers, etc., building owners want to know that their new equipment was properly installed and is going to work as expected. Unfortunately, it’s not as simple as other replacements, such as changing a light bulb. HVAC equipment replacements must be inspected and tested for proper operation and adjusted for proper airflow, otherwise the entire facility’s ecosystem could be thrown out of balance.

Reconstructing the floor plan of a building affects the facility’s HVAC and airflow. Changes in facility operation that affect airflow include the following: layout changes, adding/removing walls, adding rooms, relocating or installing new cooking equipment. Each HVAC system is originally designed for a particular building layout. Once that layout changes, the HVAC must be adjusted to keep efficiency and lowest possible operating cost. In many situations, a post-remodel TAB report is specified in the mechanical design prints or required by the local building inspector.

Facility managers appreciate a documented balance report to act as a factual starting point when HVAC issues arise. Sometimes these reports get lost in time and management changes, so when facility managers need to verify the proper settings of their HVAC equipment, they’ll order a rebalance to obtain this data. We find this especially frequent in leased facility situations whereby tenants want to be sure they are getting the correct air/water flow that they are paying for. Having a balance report provides functional data to analyze in the event that equipment malfunctions.

Prior to performing a remodel or moving into an existing space, an owner/operator wants to know what they are getting into. In a mechanical survey, we develop an inventory of their HVAC equipment, along with general condition and performance. This information is valuable for the owner’s planning and budgeting.

Facility managers want to know that the air in their building is healthy for the employees and patrons, so they call us to assess their ventilation. In this assessment, measurements are taken to determine how much fresh outside air is being introduced to the building, the condition of the air filtration, the amount of exhaust air removing contaminants, and the air exchange rates. These measurements are compared against the engineered design and industry recommendations.

It is important for building owners, operators, and managers to have a grip on their HVAC health and performance in order to prolong the life of their facility investments. In the wild world of HVAC, there’s no telling what you might encounter!

about our TAB  Services!

Darren Witter, Sr. Vice President, has been with Melink Corporation since 1996. He has served in a variety of capacities including engineering, product development, manufacturing, field services, and management. Darren earned a mechanical engineering degree from the University of Cincinnati and is a State of Ohio Professional Engineer (PE). He is also qualified as a LEED Accredited Professional and a NEBB Certified Professional. After working in and leading many of the functional areas of the company, Darren is now focused on highly strategic programs and leverages his knowledge and experience to guide and develop employee-owners throughout the organization. For more than 35 years, Melink has helped commercial building owners improve the health, comfort, and energy impact of their facilities across the U.S. and world.