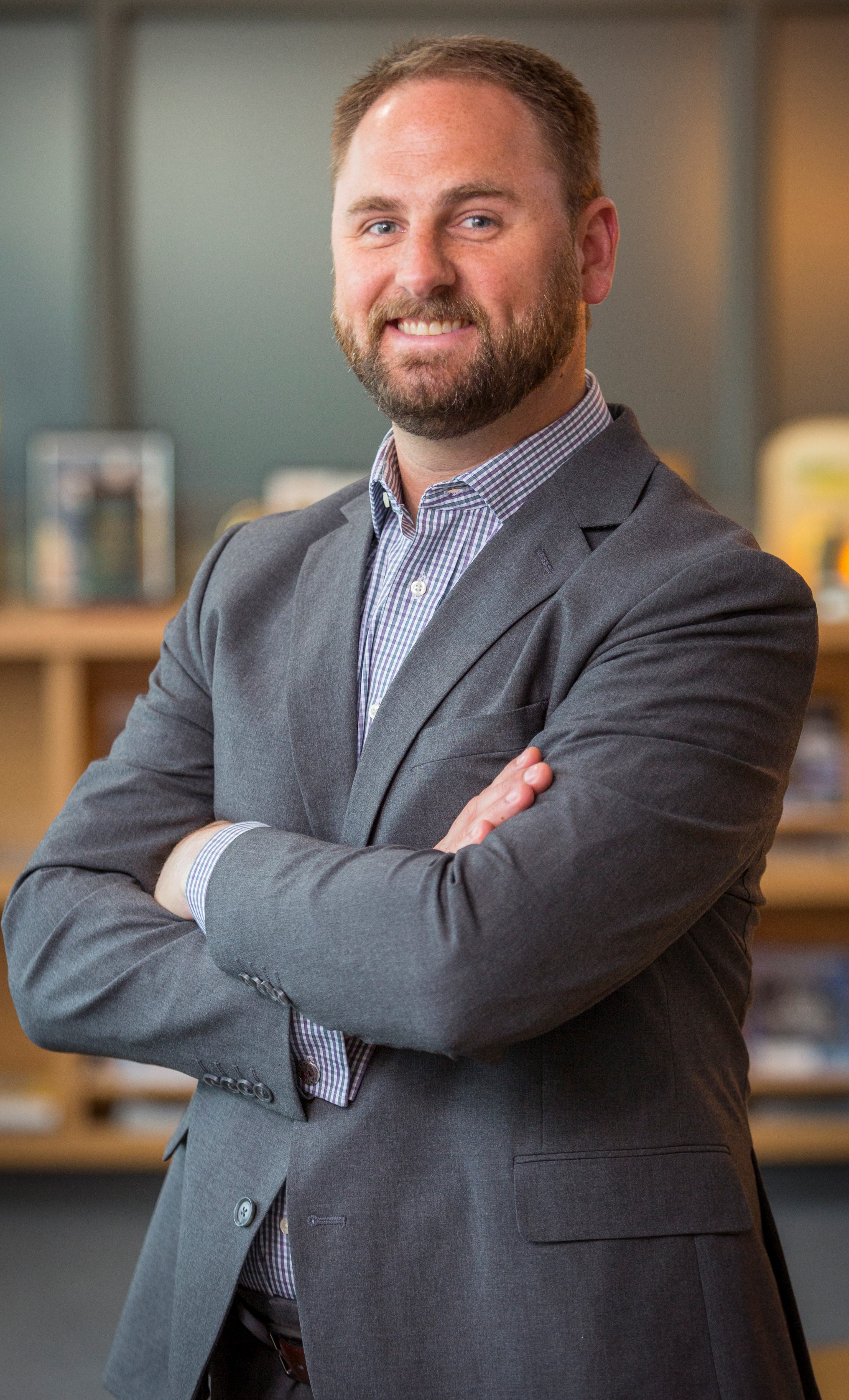 I have the unique pleasure of working with an employee-owned organization, Melink Corporation, that is dedicated toward making the world a better place. Our vision is to help advance clean energy such that it transforms the world through improving our global economy, security and environment — for ourselves, our children and future generations.

Though energy efficiency and renewable energy are at the core of what we do, sustainability is central to who we are. If we don't lead by example, who will? So, in addition to operating a Net-Zero LEED® Platinum headquarters facility, we have a super-green fleet of vehicles. Our National Network of Service Technicians each drive hybrid vehicles. Our parking lot has more than 20 electric-vehicle charging stations. In total, we have more than 40 hybrids and 17 electric vehicles (EV) in our fleet. Approximately 61% of our employees drive either hybrid or electric.

I, personally, drive a 2018 Chevy Bolt and have done so for about nine months. The car has a 238 EPA estimated mileage range and does not have the luxury of accessing Tesla's Supercharging Network. I have a 45 mile commute, one-way from my home to my office. Fortunately, by driving an EV, living in a home and working in an office that are both powered by renewable energy, my "electric gas" is very clean. I have three young kids, and it is very important to my wife and I that we set a good example — not only so we guide them toward making their own integrity-based decisions as they mature but also so in a direct effort preserve their future. As Abraham Lincon said, You cannot escape the responsibility of tomorrow by evading it today.

This month was the first time I took the Bolt on a good old fashion, American road trip. I knew it would be a challenge but as another president said, Nothing in the world is worth doing unless it means effort pain and difficulty. 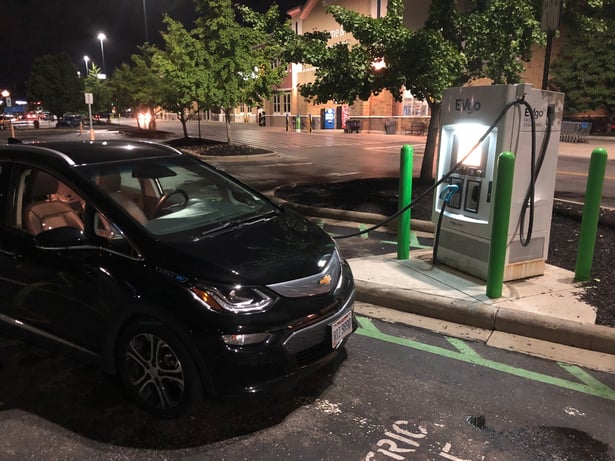 The Hardware. You've got to have an EV that has an extended range. Here's a list of the longest range EVs on the market today. But you've also got to have the capacity for Level 3 charging. On the Chevy Bolt, the hardware costs an incremental $750 from the factory. GM advertises 90 miles of charge in 30 minutes, up to the 80% mark and the speed begins to taper to protect the battery.

The Fuel. There are of course Plug-in Hybrid EVs such as the Chevy Volt and Honda Clarity. Those models have about 30-50 miles of battery capacity with traditional gasoline as a backup. This isn't the kind of EV I'm talking about here; I'm talking about 100% electrons. And I must acknowledge that during my road trip the electrons pulled from the grid may be coming from brown-power sources but not necessarily. Wal-Mart, for example, has solar at many of their locations. And one of the two EVgo stations I charged at was at a Wal-Mart. Nonetheless, what's the advantage of driving an EV versus a traditional internal-combustion engine that uses gasoline? For one, EVs convert about 60% of their energy from the grid to power at the wheels; gasoline only converts about 19% of the energy stored to the wheels. Also, electricity, even from a coal-fired power plant, is a domestic energy source. Finally, you can get your electricity from renewable sources such as solar and wind.

The Apps. Before making any long-distance road trip, pre-planning the locations of charging stations (and their distances from one another) is critical. There are a number of apps you can use to see what's out there: PlugShare, ChargePoint, and EVgo are the ones I use.

The Infrastructure. EVgo is America's largest Public Electric Vehicle Fast Charging Network with more than 1,000 chargers in 66 markets. As a non-Tesla driver, this network is vitally important for the emerging EV market.

The Planning. A few days before my trip from Southwest Ohio to Eastern Tennessee, a 350 mile commute, I identified two Level 3 Fast charging stations and one Level 2 charging station for my trip. The first Level 3 charger I stopped at was only 35 miles from my house, located at a Wal-Mart in Florence, Kentucky. I topped off and drove another 239 miles to Knoxville, Tennessee... quite literally almost no margin for error between charging stations. Fortunately, during my planning, I learned of an EVgo charging station that's being installed about 3/4 that distance, along I-75 near Williamsburg, Kentucky. So the infrastructure is continuing to develop. After making it to the next fast-charger in Knoxville... I had eight miles to spare. Nonetheless, I made it. So I charged for about one hour (180 miles). While I waited I was able to eat lunch and catch up on some work. Then I drove another 35 miles to my final destination, which was for business purposes There I stayed for about 30 hours, plugged in to a residential 120V outlet at 12 amps. I got my charge up to about 90% before making the return trip... back to Knoxville, then to Florence, then home. Similar to my first leg, I made it back to the Florence charger with about six miles to spare.

Lessons Learned. For one, my tire pressure was relatively low when I left my house. It took the necessity of my thin battery margin to realize the impact it had on my mileage efficiency. So, I filled them almost to max pressure and the Bolt was "intelligent" enough to roll this new information into its algorithm, thus giving me an increased range by about 10 miles from where I was before. Second, I noticed that by turning off my air conditioning, the algorithm gave me another 10-mile boost in my range. Also, I tried to keep my speed (on I-75, no less) at around 65 MPH. The faster you drive, the less efficient your mileage.

In order to change the world, we've got to do things differently. Otherwise, if we continue to do the same things, nothing will change. This trip wasn't easy. An otherwise normal five-hour trip took me about seven hours — one way. I didn't want to leave the house at 5 a.m., and I certainly didn't want to get home at 2 a.m. But I wanted to demonstrate it could be done in the hope that just maybe it inspires others to make the leap, not only to an EV but to a brighter future.

Craig Davis is the CEO of Melink Corporation and has been with the organization since 2006. Craig holds a BFA from the University of Cincinnati's College-Conservatory of Music and a Master's of Science in Organizational Leadership from Mount St. Joseph University. He is a certified Project Management Professional through PMI and a Certified Project Manager through Xavier University. Craig has fifteen years’ experience in the energy efficiency and renewable energy industries with a focus in HVAC Testing & Balancing, Building Automation Controls, and Solar Photovoltaics.